I think every founder or potential founder should follow justinkan on Snapchat.

You might have noticed that Justin Kan knows a thing or two about startups.

He was an early batchmate in Y Combinator (YC), the most accomplished startup accelerator, with Justin.tv which pivoted into Twitch before being massively acquired by Amazon. Now he's a partner at YC handling PR and advising the next wave of startups on growth and marketing. And you can talk to him on Snapchat.

Every week he drops gems of startup knowledge in a DJ Khaled-inspired lifecast of 10-second stories that are raw and insightful, even if they're recorded mid-workout.

What are your three favorite recent startups?

Earlier this week, one follower asked, "What are your three favorite recent startups?" Justin listed:

Even though I like to live at the edge of technology and startups, I hadn't heard of these three, so here they are in a little more depth.

Simple Contacts is an app to renew your contact prescription and order new lenses. Real doctors review your eye exam results (asynchronously) to ensure your prescription hasn't changed. The exam is $10 with no insurance requirements, and is currently available in 18 states. 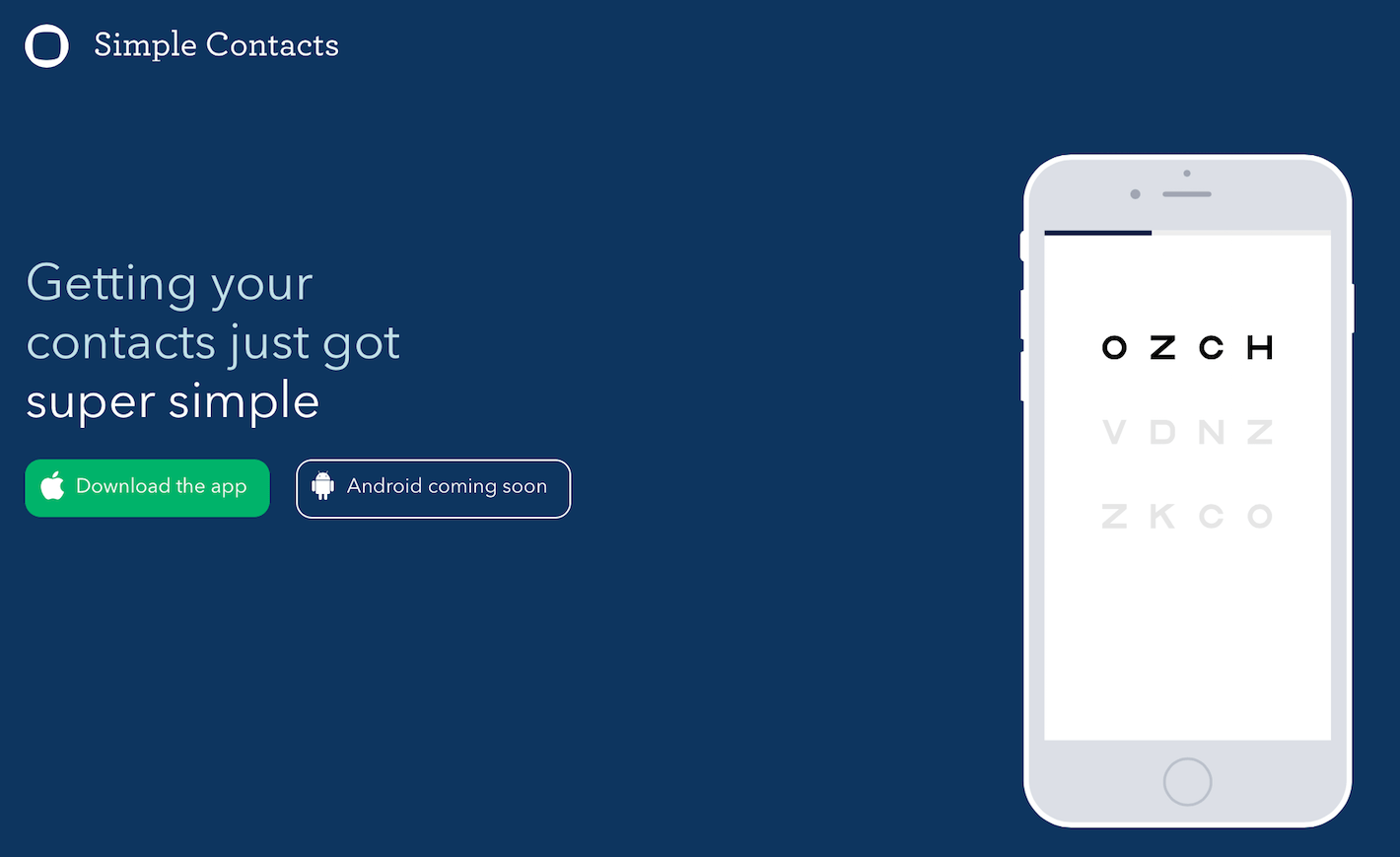 This field is categorized as store-and-forward teleophthalmology, meaning digital eye care delivered asynchronously, under the rapidly growing umbrella of telemedicine. Work in it can involve automated image recognition or pattern recognition, and considering that possibility hints at a network effect —

What could Simple Contacts do with access to more eye exam data than any eye doctor in the world?

A lot of learning.

When Marc Andreessen said software is eating the world, this is case in point — permanently changing the landscape of optometry through software automation. Ten years from now, you might only have to visit your eye doctor for abnormalities.

It sounds like if your prescription changes, there's not much they can do. There are some conditions (see FAQ) like astigmatism which disqualify someone from being able to use the app. [Correction: I misunderstood the FAQ here. Simple Contacts clarified that the app does indeed support astigmatism.] As someone whose prescription changes frequently, I need an annual eye exam anyway, so the app isn't quite accessible to me (yet). Luckily for their market, one of the seed investors, Notation Capital, stated that 79% of adult prescriptions don't change over five years.

Regarding lenses, the price for one year of Dailies Total1 was $760, or roughly on par with the best pricing online [1-800 Contacts lists the same for a few bucks less before a rebate, and Simple Contacts emailed me a rebate shortly after joining]. They accept some insurance as an out-of-network provider. If you mostly buy contacts through your eye doctor, this is probably cheaper for additional boxes beyond your insurance benefit. If you do not have eye insurance, the app also becomes pretty appealing, and maybe they're hoping to capture that market.

The convenience, saved time commuting and in the waiting room, and reduced hassle of visiting the eye doctor less frequently are a promising long-term vision.

ScriptDash is a pharmacy that delivers your prescriptions for free in the Bay Area. As a company ScriptDash is fresh off a $6M Series A in June with a team of about 20 people who believe the pharmacy industry is broken and want to fix it. 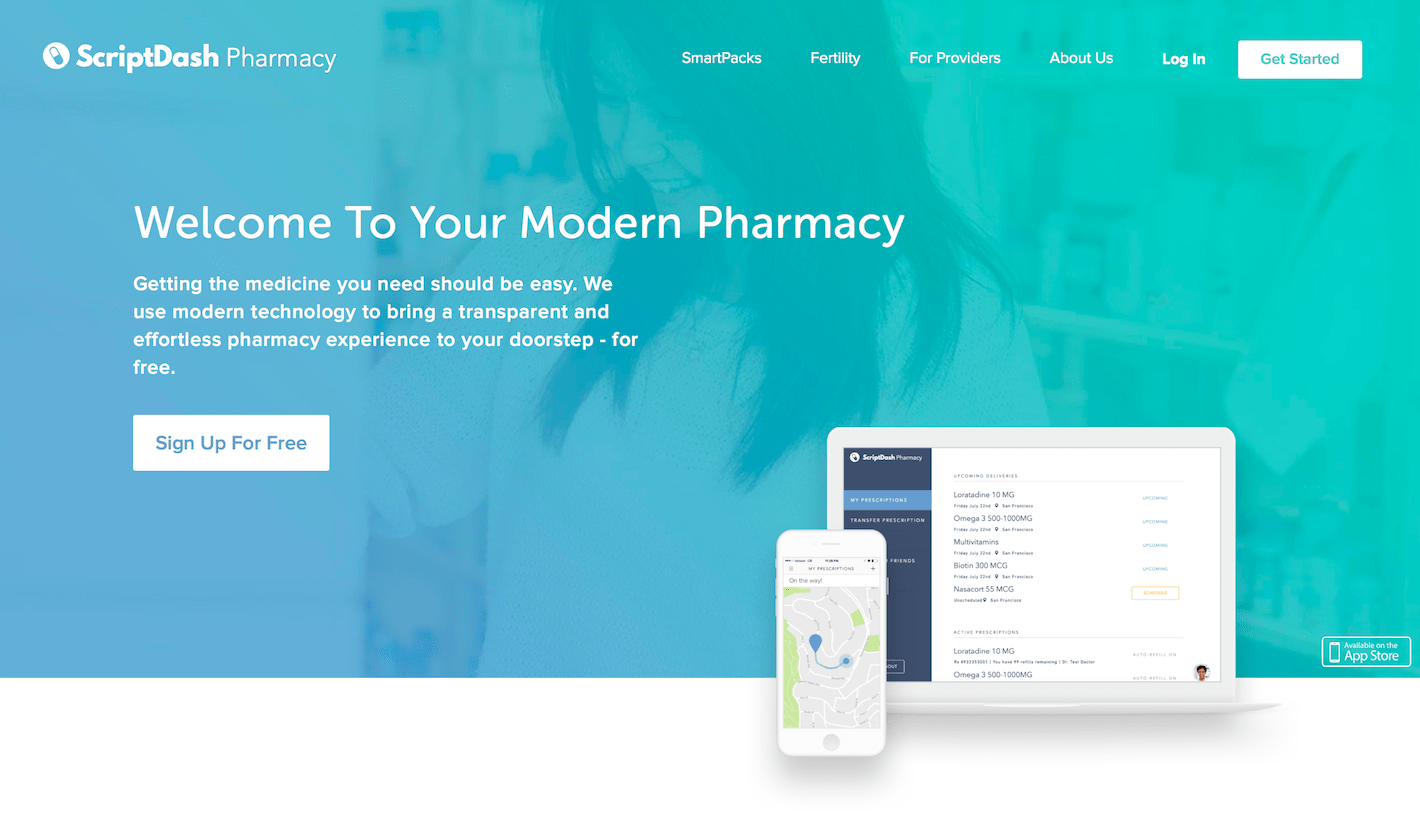 The general theme of their customer experience is focused on simplicity and ease of use. They advertise that copay and insurance work the same as any other pharmacy, and that you can set your prescription refills to renew automatically in the iOS app. Additionally, you can reach your pharmacist by text, call, or email. Delivery is done via in-house couriers and for most orders, you don't need to be home to accept it.

I couldn't find much about their business model online. Presumably part of it is about removing the overhead of a brick & mortar drugstore. Additionally, I don't know a ton about how the B2B side of the pharmacy industry, but the SF Chronicle explains that CVS and Walgreens dominate 90% of it and the models are complicated.

ScriptDash maintains a strong presence on Yelp with an overall 5-star rating and many reviews from delighted customers. Through a partnership with Heal, which provides doctor house calls as a service, you can even get diagnosed and have the meds delivered without leaving your home. That feels like the future.

The idea of saving a trip to the pharmacy for many prescriptions is interesting and I'm excited to see how and where they expand next.

Wave is Venmo for sending money to Africa from your debit card. Basically their model is to provide a more cost effective alternative to Western Union or MoneyGram by cutting out the additional fees beyond currency exchange.

This isn't a space I know much about, so I did some research. It turns out that money transfer into Africa involves giving up 12% or more to fees, mostly through Western Union, and the inconvenience of traveling far to and from the bank, then waiting in a long line as well.

Additionally, unlike the U.S., Africa's economies are predominantly cash-based and most people don't have bank accounts or credit cards, but they do have phones, and mobile wallets or "mobile money accounts". Banking infrastructure doesn't exist there, and instead of Apple Pay, Venmo, or PayPal, the wallets are run by mobile providers, such as Vodafone's M-Pesa. (Sources: TechCrunch, FiveThirtyEight)

Those conditions seem ripe for disruption.

I wouldn't have discovered any of this if it weren't for Justin's share on Snapchat. If you're curious to know more about startups changing the world, consider giving him a follow.

You can learn more or try the three startups at:

If you enjoyed this post, feel free to enter your email below to subscribe for my next one. Should you feel inclined, you can also send me a coffee ☕️ via ko-fi.

Get the latest posts delivered right to your inbox

A conversation with the creator of data pipeline framework Airflow on its origin, usage, and what data engineering means for startups and businesses.

Stay up to date! Get all the latest & greatest posts delivered straight to your inbox